Today was my second walk with walking group I joined recently and, after arriving at the second meeting point on time (Keynsham Station – a little early, in fact), I faced a bit of an unexpected wait before the train arrived from Bristol Temple Meads, carrying others from the group. There were only six others, plus the walk leader, which is quite a shadow on the turn-out for the walk seven-days ago. Most were new faces or, certainly, people I’d not met or spoken to before.

I remember getting ‘looks’ from other people waiting for their trains. There I was, dressed up in walking gear (muddy boots and gaiters still soiled from a week ago). Well, it helped the rest of the group to identify me as ‘another’ as they stepped on to the platform.

We were planning to head on a seven-mile walk through the town of Keynsham (towards Bath from Bristol), leading towards a little place called Swineford (the ‘e’ is silent) and, somewhere along the way, passing the house of Noel Edmonds. 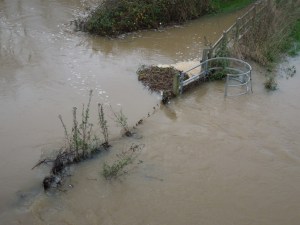 Sadly, torrential flooding in and around the town meant that we had to avoid the majority of our other routes and it was up to our leader to navigate a new path without back-tracking once we reached the midway point. 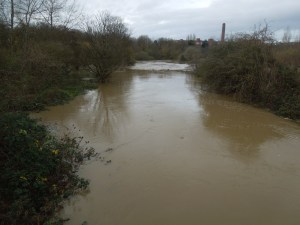 That is something that concerns me about the possibility of leading a walk one day. I think they prefer you to wait until you’ve been in the group for at least six-months before they would expect you to consider leading a walk so, I’ve got time to buy some proper Ordinance Survey maps and to work on my reading and orienteering skills.

A week ago, I was planning on doing the other walk set out for the day; a thirteen-mile climb around the hills and woodland of Bath; slightly further north of where I went alone a few weeks ago; towards the east of the city. It was raining in my area when I eventually got up this morning but, I was never going to make it to the meeting point for 9.30am. It’s a Sunday, after all and, although I don’t wish to disclose this publicly, something happened on Friday night that caused me to lose a few hours of sleep. Forecasts for the city were fine up until the afternoon. Still, I didn’t fancy the thought of walking all that way and potentially getting soaked. 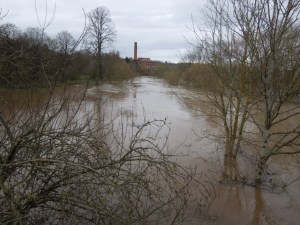 People were again very friendly and open to initiating conversation with me on this walk. I tried to keep it going but, on most occasions, it just seemed to die off suddenly. It’s something I’ve never understood and it was also an issue that my counsellor seemed to glaze over in our sessions; citing my anxiety as the problem. It’s rare that I am able to meet someone with whom I am able to maintain a conversation but, I know that I did meet one special person earlier this year… But also, it was the first time I’d met these guys so, I guess it’s quite natural as well.

It looks like there’s a bit of a break in the group’s calendar before the next walk, as some members are going away for a long weekend (I missed out, as I only recently joined since the spaces were filled). In that time then, I’ll try to keep myself occupied with my own walks (weather pending). My one friend from the group so far is actually going away with the rest of them so, I won’t even be able to plan anything with her. It’s back to the solo stuff for the next week or two. It also seems to go quiet after Christmas but then, there’s always the chance the walks could be added later.

I arrived home earlier in quite an aggressive mood… Maybe it was the frustration in that I went to the pub afterwards but that I was again unable to converse with the others. Mum’s dishwasher is making a lot of excessive noise (possible motor bearing issue) and, for the second time this weekend, I’ve had to plane the edges of the swollen back door so that it will close properly. I can’t paint it with all this wet weather so, it just keeps absorbing moisture.

For your amusement, we did come across this rather large pig in one field. It came running towards us as we entered but, unlike the frisky bulls further down the field, it meant no harm! I believe that’s the first pig I’ve seen on my walks. I don’t like to stop too much when I’m walking with a group so, I didn’t allow myself too many opportunities to photograph as much as I would alone.

That was the closest we came to seeing Mr.Blobby… 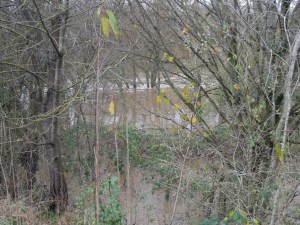 Whatever you’re up to this week, I hope you have a good one. 🙂