I can’t bring myself to say those three words at the moment so, I’m afraid you’ll have accept the acronym that at the head of this post, this evening (or, whatever time it is, where you are). If I say it, I won’t feel as though I mean it. That’s in no way a disrespect to anyone who may or may not be reading this; it’s simply my current state of mind. 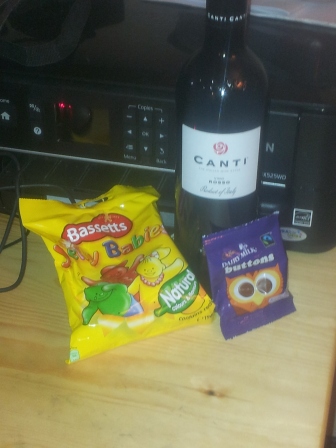 All I have to keep me going until midnight.

I was tempted to title this ‘Happy? Not Yet‘ as I find myself ending yet another year on my own.

Those three items in the photo above are all I have to keep me going and I don’t even drink red wine!! If the contents of that bottle disappears tonight, it’ll be for the second time this year. I dislike alcohol but, I don’t know; when I feel this way and there’s an unopened Christmas gift lying around and no-one to share it with (I asked before; no-one likes red wine), I feel an urge to drink it.

END_OF_DOCUMENT_TOKEN_TO_BE_REPLACED

The WordPress.com stats helper monkeys prepared a 2012 annual report for this blog.

It’s not very often that I have dreams and I’ve never really been sure if that it isn’t a sign that a part of my life needs to change. Dreams are a natural process of the subconscious, right? Maybe a lack of regular sleep is a factor. That’s certainly been a habit of late; waking up frequently during the night and early mornings. Deliberately staying up late and, with time off work, laying in bed until it’s almost noon.

One night in this last week though, I had a dream involving two women (calm down) that I’d like to try and share.

END_OF_DOCUMENT_TOKEN_TO_BE_REPLACED

I feel I could or should be sat here now, thinking and coming up with a list of resolutions for the impending new year. Already, I’ve decided that there is one change I am going to try and enforce, day by day and that is to be completely honest with people.

I’ve always considered myself to be an honest person but, as I’m sure many of you will understand; certain situations arrive where it seems easier to lie about your thoughts and feelings. To ‘go with the flow’ for an easier ride.

If I don’t like something, I’m not going to pretend that I’m interested. If I disagree with a statement or procedure at work, I’m going to make my voice heard. This isn’t going to be easy and, if I look at the full picture, it’s going to distort be come an overwhelming blur. That’s why I’m aiming to take it one day at a time. As each day comes. Instead of looking for things, I’ll allow them to happen.

END_OF_DOCUMENT_TOKEN_TO_BE_REPLACED

I’ve been sat here for the last hour or so, trying to decide on what to write for today’s post while distracting myself with other things (YouTube, Facebook, etc.). I think I’ve had three different thoughts for themes yet now, I can’t remember a single one of them. So, I’m just going to write about my morning and whatever’s on my mind…

(I think that’s a warning that this isn’t going to be a positive post!)

END_OF_DOCUMENT_TOKEN_TO_BE_REPLACED

“Your personal sculptor is carving a person, thing or event from the last year of your life. What’s the statue of and what makes it so significant?”

END_OF_DOCUMENT_TOKEN_TO_BE_REPLACED

You may remember that I bought myself a book to learn more about bipolar disorder from a first person perspective. That was back in October, I think.

When Someone You Love is Bipolar: Help and Support for You and Your Partner

A few days ago, I finished reading this book and now, I feel ready to share a few brief thoughts…
END_OF_DOCUMENT_TOKEN_TO_BE_REPLACED

I went to bed last night with an idea for a post I was going to write as soon as I got up this morning. That idea has since vanished from my mind so, instead, I’m going to write about something else; on a late Christmas morning where my sister’s still in bed, my mum’s elsewhere and even my dog has decided to return to slumber.

Yesterday afternoon, I paid a brief visit to my granddad‘s house for an hour or two. It was the first time I’d been there since September, I think, and I had to be careful to avoid some of the flood waters. Mum was already there, as it’s on her way back from her half-day at work. So, when I arrived with my sister, it was a surprise to the two of them (he and his wife) and, according to mum, it really seemed to lift them, as they often feel as though we don’t make the effort.

It was sad to see how they have deteriorated since I last saw them. Granddad’s been re-married since before I was born but, I still don’t like to refer to his wife as ‘my nan’, as my real grandmother died six-years ago. She was recently diagnosed with Alzheimer’s and, after a nasty fall down the stairs two-years ago, she’s not been the same since. Mobility has become very difficult and we’ve all witnessed the gradual change. My granddad is struggling to care for her on his own and his health and happiness appears to be suffering because of this. He’s in his 80s but won’t accept any outside help. Apparently, he is now entitled to a carer’s allowance, which he would be happy to accept, and he also talked about how they’ll be able to receive a walk-in shower. That would definitely help the two of them, even if they still have to face the struggle of climbing the stairs.

Another issue is that the grandson from the other side of the family is living with them. Unemployed and un-motivated to do much around the house to help them; he’s living off the little allowance they need to survive on. Their heating’s always on and I do worry about things like this. They can’t kick him out because he has nowhere else to go, with family issues in his own home.

Seeing people you’re close to deteriorating in such a way, living a near-meaningless existence where they seem to do little else each day besides sitting quietly in the kitchen; it’s saddening and almost heart-breaking at times. I struggled, witnessing my grandma’s decline in her final years. For years, as a kid, I never understood how serious the illness was. Then, suddenly, it hits you.

I said recently that I do take my ever-present family for granted sometimes and, it’s when you witness something like this that you begin to appreciate just what and who you have and how important they are. They won’t be here forever. It is a relief to see that some medications are available to try and treat the effects of Alzheimer’s today. When my grandma was suffering with dementia, there was nothing of it’s sort; they could only prescribe tablets designed to combat headaches.

Suddenly, I remember what I was wanting to post last night – although, I fear it may be a bit late now…

One thing I love about Christmas Day is waking up to the silence of the world around you. It might be different living next to a motorway but, the A-road next to mine remains silent and still, first thing in the morning. Sometimes, the tranquillity is repeated on the morning of Boxing Day as well. I do enjoy waking up and appreciating this irregular calm.

Merry Christmas to one and all! If you’re sat in front of your computer screen on this joyous occasion then, you are certainly not alone! 🙂

I want to write something today but I’m really not sure what I want to say, other than the fact that I don’t particularly like this time of year as I end up feeling very lonely. Perhaps later on today, I’ll take a look at some writing prompts from WordPress. For now though, I’ll try and stick with this to see where it goes.

Christmas Day is, of course, tomorrow; a day where I put on a fake smile and pretend that I’m as happy, inside, as everyone is appears to be. I mean, you’re supposed to be happy and joyful at this time of year, aren’t you?

I feel like I’m only in this for the time off work, which is very welcome. I’ve bought cards that I’ve still yet write but I still feel a bit guilty for not having bought anything for my mum or sister. My only gift so far has been for ‘May’, as I knew what I was going to get her, even though she insisted that I shouldn’t bother. I’ve no idea if she’s even received it or how she’ll treat it with other things that are going on at the moment… I find it hard to buy things for family when they don’t seem to want or ask for anything. 😛

Last Monday, I had a bit of a breakdown and I realised then that I do take my family for granted. It feels as though I don’t need to worry about them because ‘they’ll always be there‘. Friends don’t seem to stick around when you one of you loses interest or you don’t maintain the effort required to stay in touch. Family are always there, whether you want them or not.

A year ago, I joined a couple of internet dating sites in the aim of finding someone special so that I wouldn’t be in the same situation a year later… Yet, here I am; alone again. With no-one. My last two attempts to meet up with ‘May’ (both within the last seven days) have back-fired when she’s been called away to attend to other things (or people). It saddens my heart, leaving me trapped in a state of despair.

It is nice to see family and I should be off to see my granddad this afternoon but, that’s all it is. I don’t have anything else to give; I’ve never felt as though I want anything more from them. I do want my own life but I don’t know why I’m like this.

But it is Christmas Eve and I hope you all have a Happy Day tomorrow. 🙂

This is a song I love but don’t listen to often enough. Neither can I name another song from this band although, I’m sure they’re created many over the years. I’m not even sure how to pronounce Queensryche but, it doesn’t matter! 🙂

Read on for the lyrics: