It’s been almost twenty-four hours since I last had anything to eat and I don’t think I managed more than two-hours worth of sleep last night. I left work yesterday feeling ‘a bit ill’ and not-right, before I found myself sat on the toilet and, well, I’ll spare you the details! Needless to say, it’s leave me feeling very weak and ‘hurty’ (like a flu bug) and, as I’m not feeling much better today, it looks like I’ll have to pass on the planned group walk this evening.

At least now, I have a chance to sit down and write about the walk I went on last Sunday. There aren’t many photos to share but I’ll try to keep you entertained.

That first image shows the state of my walking boots and gaiters last Saturday night; six-days after getting lost in the darkness and snow on top of the Cotswolds. I decided it would be best to try and give them a bit of a clean, now they’d finally dried out.

Our meeting point was rather conveniently at a train station in a neighbouring village. It wouldn’t have made sense for me to have driven in to Bristol, only to have caught the train heading south again from Temple Meads. Google told me that it would take me 1 hour and 15 minutes to complete the first stage of my journey on foot. I was 25 minutes late leaving because I couldn’t get the zip on one of my gaiters to work! Frustrated, I was beginning to panic and feared that I wouldn’t reach the station in time… Yet, with a few sprints across local fields and down the country lanes, I was able to complete the walk in only 55 minutes, with 20 minutes to sit down before the south-bound train reached the station! 😎

I recognised several faces from the many back-packed ramblers stepping off the train; none of which said a word to me, as they descended down the steps and I slipped myself in to a space within the never-ending line of people. Another local was waiting at the near the roadside and, as we all gathered there before heading off, I was greeted by the leader from a previous walk, which was nice. I kept looking around and behind my the girl I’d met one week earlier didn’t appear to have joined us. It was a slight shame but still, we had miles to cover yet.

So, this would passed through an area of the West Country that I have grown up within. I went to secondary school in the first village. Hiking through the woodlands, we passed a place where I found my  first part-time job. This path carried us through an area on the border of the village I currently live (as I have done, for most of my life). Then, we went on to my favourite local pub (for the meals) before climbing one final hill and making our way to a second train station in the next village and a departure journey home for the majority of the group.

There were times where I almost wanted to jump to the front of the cue and take control of this walk! I used to do a lot of walking around some of the areas we covered when I would skipping school during the second year of my A-Levels. This leader did take us along paths that I was unaware of but it was a great feeling to rediscover steps and stiles I hadn’t seen for almost precisely ten-years now.

After the first couple of miles, I felt a cramp-like pain on the front-side of my right thigh (I’m sure there’s a better name for this body part…). I had the same experience a week earlier and it’s also happened to me when I’ve done walks on my own. I always stretch carefully at the dawn of every day (even when I’m not walking) but I wonder if it’s to do with how I walk… I can be quite a self-conscious walker, you see, but also like to ‘lift my knees’ while hiking up a hill, as I believe it helps to give me that extra little work-out.

Still, we had another seven-miles to go and, despite a couple of near-slips, I did just about manage to remain standing on two feet for the whole duration of the walk. There must’ve between 20 and 30 of on that day so, I did get to speak to a few new people. None of which I really ‘connected’ with but, I’m focusing on enjoying these walks first and foremost. Having grown up and lived in the country my entire life, when I meet someone who’s city born and bred, I almost feel like I’m the native of a foreign land… 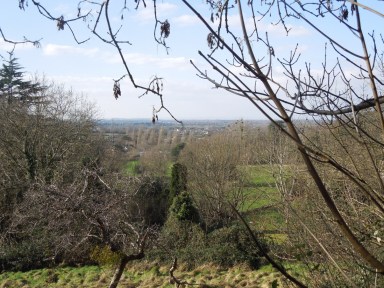 Walking through my village bought back memories of past experiences; from falling out of a pedal-powered go-kart and tearing my face apart at just 5-years of age (one day before school photos, too) to falling off my mountain bike, almost falling to my ‘death’ as I slipped from steep rocks with a harness and hopelessly attempting to jump across a boggy path, only to end up losing both shoes and ruining a fine pair of socks! 🙂 I’ve been back living in this village since 2004 but this was the first time I’d returned to these woods and the combe.

Some kind of fear has always held me back… Fear of the unfamiliar or just that someone might recognise me?

We reached the pub almost bang-on 2 o’clock and as planned. As I expected though; the car park was choc-a-block (it was a Sunday) and there was, quite literally, no room at the inn for two-dozen muddy ramblers! So, we sat outside on benches next to the garden. I think I was the only person not to order a cooked meal or even a drink from a bar. I made the excuse that I didn’t want to have to walk the rest of the way on a full stomach but really, I think I was afraid of too many possibilities. So, I did feel awkward for the half-hour or-so where we were sat there. Avoiding conversation as everyone else tucked in, I indulged myself in an ‘unsociable’ conversation with a friend, through the power of text messaging.

It was a relatively sunny day and a few of us were able to find seats that also captured the sun’s bask. Sitting still for so long had left us feeling chilly so, it was time to wrap up as we set of for the final stretch. That took us up and over an infamous local hill (which I’d never visited before) before we found our way along footpaths to the train station. As everyone else headed off to the platform, I stood back to sort out  my belongings in preparation for one final walk home. I only really said goodbye to the other local guy. I kind of wanted to say thanks to the leader and to let him know that I was heading off alone but then, these groups don’t operate like a school trip where everyone person must been signed off and numbers accounted for. I don’t know whether anyone really noticed.

I anticipated my final walk home to be around two-miles, which I thought would last around half-an-hour… In actual fact, it was closer to 45 minutes! My feet were in agony after all the concrete we’d covered and there weren’t any convenient footpaths for me to follow between there and home. My left ankle (strained at the front) is still giving me grief as I write this today and my right foot’s a bit sore from the walk two-weeks ago. I thought about phoning for a lift but, not only was I muddy, I was desperate for a wee, in an area that was too open and civilised for me to simply pop behind a bush or tree! Any time spent stopping to remove my gaiters and muddy boots would’ve increased the risk of an accident. So, I struggled home through the pain, alone. It doesn’t help that my insoles are ruined after the previous walk’s saturation. I’m now looking out for a pair of waterproof insoles, if such an item exists?

Having a bug this weekend does provide me with an added excuse to rest myself, even if I do get to miss a walk this evening that I was quite looking forward to. For a nine-mile walk, I reckon I added another seven-miles in avoiding public transport and lifts.

3 comments on “Home Is Where the Hiking Is (or Was)”